The truth about marriage 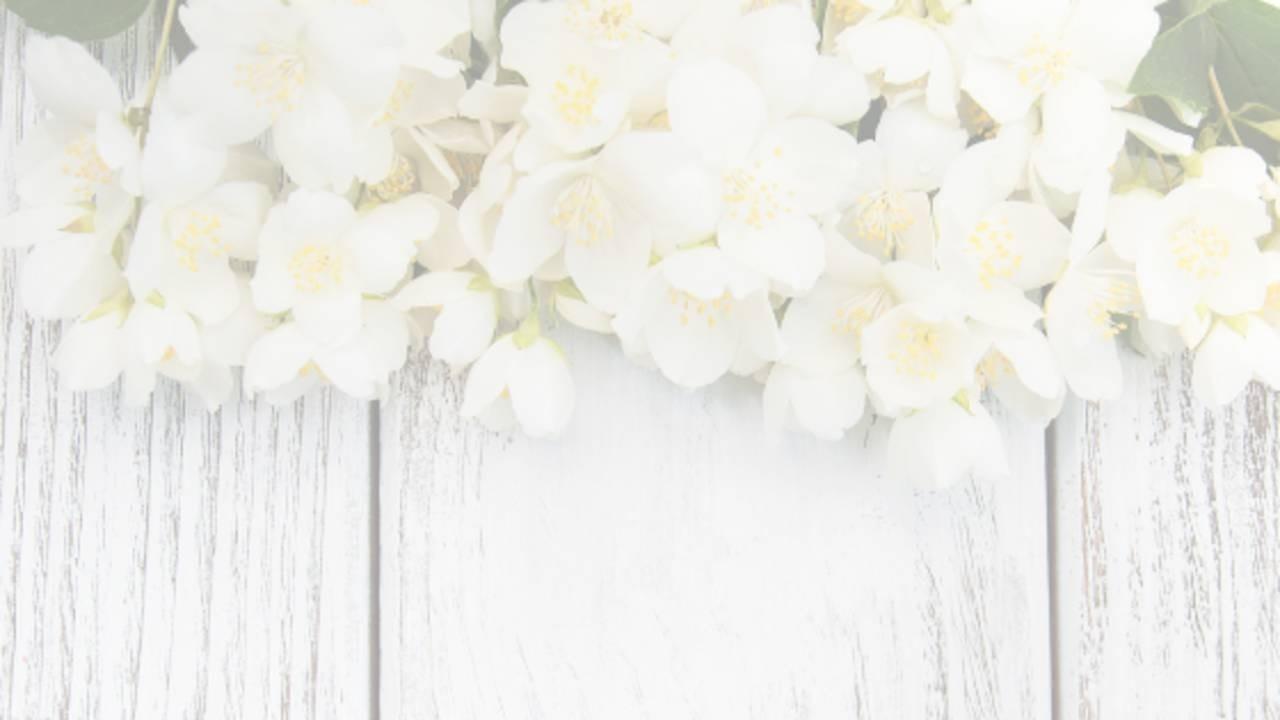 I was recently talking with our videographer about marriage. He shared that when he was engaged to be married, rather than going to marriage counseling, he and his bride decided to have supper with several married couples they admired. These couples had all been married for decades, and they thought they would have good marital wisdom to share. Each couple shared the same advice – marriage is hard.

This advice frustrated them. And it frustrates me, too.

We received similar advice when we were engaged to be married. It usually went something like, ‘marriage is hard, but hang in there.’ Or, ‘We’ve been married ___ years. It hasn’t always been easy, but we’ve made it through.’ Maybe you’ve heard that, too.

As a newly engaged girl, I remember thinking, “….Great…?” Are those descriptions of marriage supposed to be encouraging? I think they truly are intended to be, but instead, they paint a dismal picture – as if marriage is something to simply survive.

Everyone is so quick to tell you how hard marriage is. But as someone who is now in the ‘been married over a decade’ club, let me tell you what marriage is – it’s what you make it. 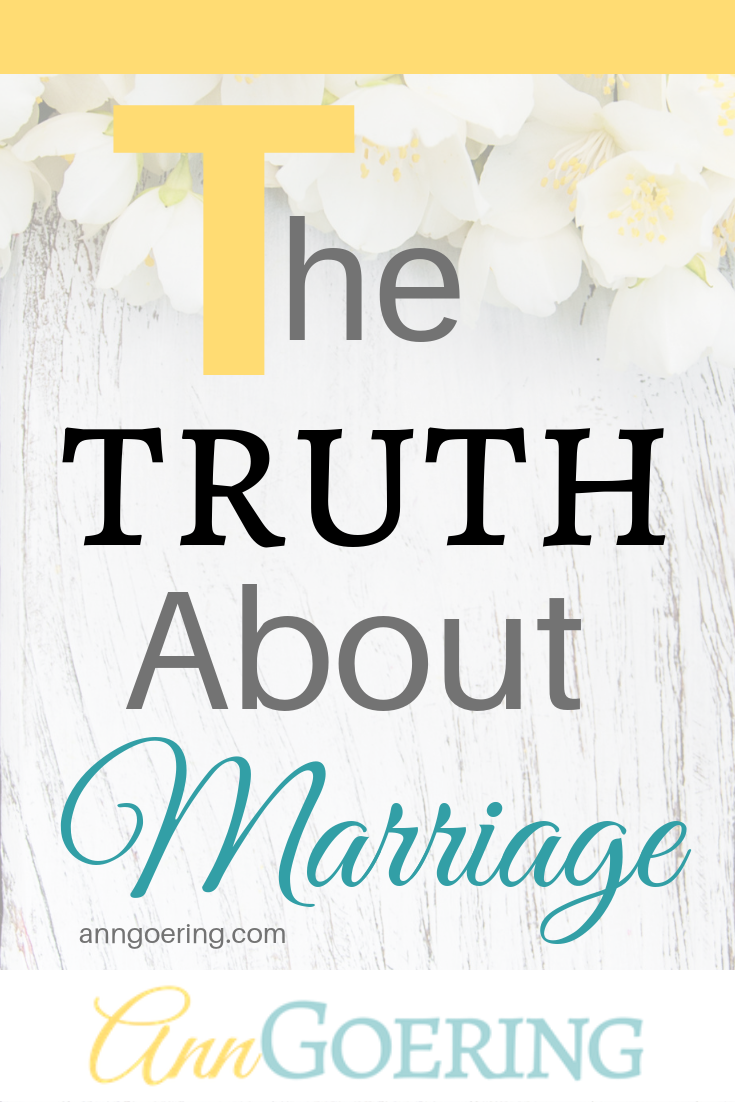 Is this too much? Is this too honest? Maybe. But can we please stop blaming hardness on marriage, and instead acknowledge that it’s the complexities of human relationships?

Marriage, as any relationship, is oftentimes more of a mirror than anything else. So often we think it’s the other person that’s the problem, when really, if we would just be honest with ourselves, it’s often us. If marriage is hard, it’s because it’s in relationships where we come face to face with our own weaknesses, selfishness, and pride.

Friend, I don’t mean to lay all the blame at your feet (or my feet), but truthfully, 90 percent of the time, we place too much blame at the feet of someone else and not enough at our own. It’s so much easier to shift the blame than to acknowledge our own contribution to a broken relationship. It’s so much easier to blame the other party than to take an honest look at our own behaviors, words, and actions, and make the hard choices that lead to necessary changes.

You might be thinking, ‘You don’t know my spouse.’ I understand. And I’m absolutely confident that part of the blame belongs to your spouse. Undoubtedly. Because, like me, you’re married to an imperfect person.

My husband is wonderful. And I make the choice every morning, and usually several times throughout the day, to think of him that way. Chris is kind and patient and hardworking. He is faithful and generous and brilliant. But he’s not perfect. And if I wanted to dwell on his imperfections, I could be a dissatisfied wife. I could be frustrated and miserable – just as he could be if he chose to focus on my imperfections. There are always going to be imperfections that we could choose to focus on along the way.

But we made the decision early on, that we would not have a hard marriage. We believed having a hard marriage was a choice, not a rule. Instead, we wanted to have a great marriage…and we have.  It has been incredible!

Have there been hard days? Yes. Are they the fault of our marriage? No. Hard days have been because of life circumstances, the reality that human relationships are complex, or because we are imperfect people dealing with our imperfections in close quarters with each other. That’s not because marriage is hard. That’s because we’re two imperfect people in close relationship, and that is hard. It wouldn’t matter if we were friends, unmarried but living together, or sister and brother – if we lived life this interconnected, there would be days when our human nature got in the way.

We’ve been married nearly eleven years now (still newlyweds really, in the scheme of things.) and there have been so, so many more good days than bad days. Eleven years really isn’t that long, so I don’t say all this as an expert, simply someone who is eleven years in and taking a moment to stop and take stock, but it’s all in what we choose to focus on. If we just choose to focus on the good, we can have a good marriage.

Emotions always follow our mind, so if you choose to have a good marriage and make decisions (the 100’s of decisions you make every day) accordingly, soon your emotions will come into line.

***Though I believe choosing to focus on the good will improve nearly every situation, please note, this is not to downplay abusive behaviors. If there is abuse in your relationship with your spouse, please, please seek counseling. If you have a gut-level knowledge that you are not OK because of what takes place within your daily interaction, there is so much wisdom in seeking help so that you can be OK again. Abuse is absolutely a different story. What I’m talking about here is the day to day, “normal” relational issues.***

My videographer told me he had turned to his wife after they left one of the suppers where they had heard yet again that marriage was hard and they would have fights, but to stick it out, and made a vow not to ever fight with her. Several years in, they’ve not had a fight yet. They’ve had disagreements for sure, but he said if it ever gets to the point that he’s fighting with her, he’s not in a right place with Jesus.

Isn’t that beautiful and oh so convicting at the same time?

To realize that he (and she) has a conscious choice to make in the face of disagreement, and that they are ultimately responsible for being in right standing before God in the midst of it, is truly incredible. There’s a deep realization there that they are responsible for their reactions even in the moment of disagreement, and that their walk with God should be at the forefront, even in the midst of their human interactions. It’s an acknowledgement that they are imperfect people, but they are on a journey to be more Christlike and that journey takes place in the hard moments of relationships. It’s an awareness that they are responsible for their marriage and their choices determine the course of it. It’s an understanding that they have a choice in the matter and the outcome belongs to them and not to their marriage.

If only more individuals would understand this, we would have fewer people saying marriage is hard, and more people acknowledging that Jesus needs to be King of their lives.

I’m climbing down off my soapbox. I promise I am. But a heartfelt plea before I go: if an unmarried couple or newlyweds ask you for marriage advice, please don’t tell them marriage is hard. Be transparent, be real, but also be honest. Tell them they’re on a lifelong journey to become more Christ-like, and that isn’t always easy. Tell them close relationships are often where we come face to face with our own imperfections, and that’s hard to handle. Tell them that life is hard sometimes. But, please also tell them that marriage is a gift from God. Tell them it was designed to be good. That God created it to be life-giving, to be companionship and intimacy, deeply connected partnership, and the beauty of knowing and being fully known.

If you don’t know that kind of a marriage personally, read Genesis 2, and ask the LORD to show you what unity between a man and wife looked like in the garden of Eden. Because it was created to be beautiful. Ask Him to reveal to you the goodness of His design for marriage, and to let that goodness seep into your own marriage.

And friend, mostly, share this: marriage is what you make of it. Like most good things in life, a good marriage doesn’t come by default. It comes by choice. 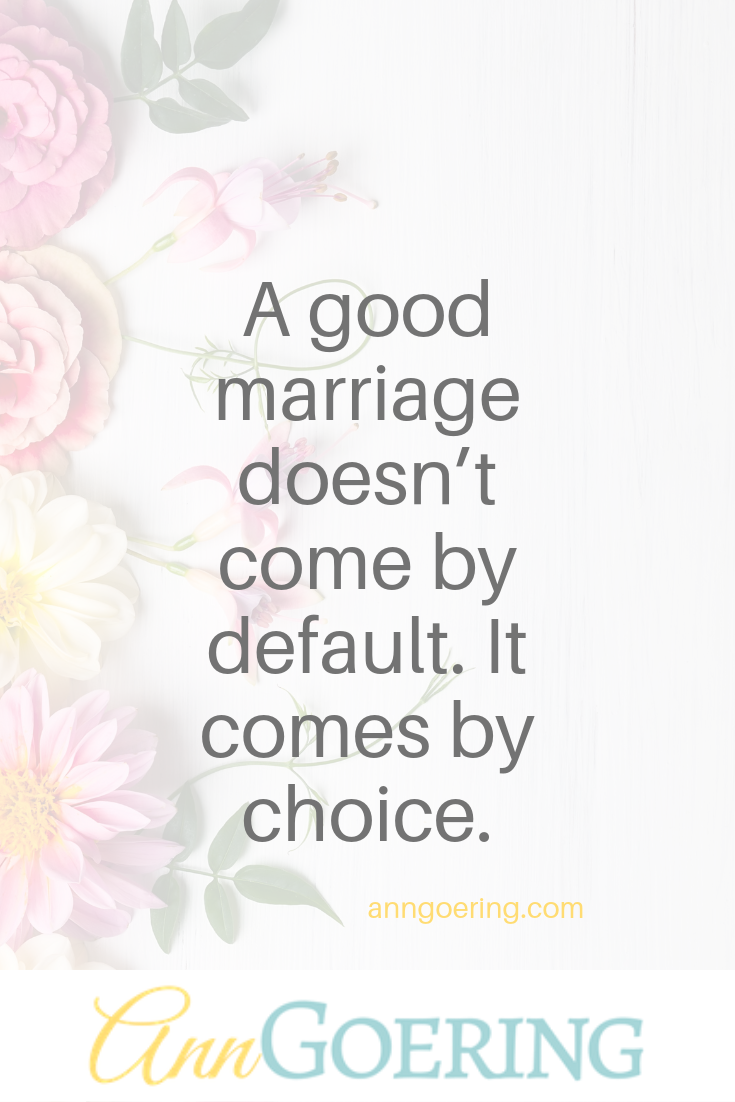